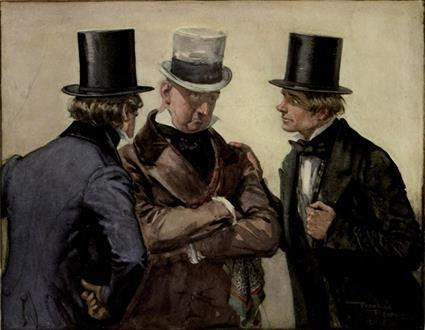 If great novels can teach us much about love and loss, then what of profit and loss?

Shortlist has mined bestsellers and literary classics for entrepreneurial wisdom and it transpires that the world of commerce has indeed exercised the minds of history's finest scribes.

If great novels construct a narrative from the great preoccupations of man (and woman), then it stands to reason that business - the ultimate determiner of wealth and occupier of the greatest proportion of an entrepreneur's waking hours - should figure prominently.

Terry Pratchett, whose paradox-driven humour follows in the noble tradition of Joseph Heller and Douglas Adams, encapsulates the contradiction at the heart of entrepreneurs in the novel Equal Rites: "It is well known that a vital ingredient of success is not knowing that what you're attempting can't be done."

Indeed. In essence, it is their naivety, their sheer bloody-mindedness in the face of overwhelming evidence that their idea cannot possibly succeed, that drives entrepreneurs to - well, succeed.

Entrepreneurs labour in the face of unfavourable odds as they recognise that "the merit of all things lies in their difficulty", as Alexandre Dumas wrote in The Three Musketeers. This advice should resonate with anyone who has toiled through a business's formative stages, perhaps alone and often fruitlessly, for a toehold in a marketplace with bigger, more established competitors.

Meeting such an onerous challenge is naturally very time-consuming, so it's easy to get mired in the day-to-day slog to the detriment of calm, strategic reflection.

But, as Victor Hugo's Les Miserables counsels, taking a step back to take assess the big picture, is not an optional extra to your regular tasks, but a worthy, essential task in itself. "A man is not idle because he is absorbed in thought. There is visible labour and there is invisible labour."

And if there is no shame in delegating the minutiae to ruminate on long-term strategy, neither is their shame in failure, as all true entreprneurs recognise. Far from branding the architect of the failure a failure themselves, a failed venture actually makes them stronger, a truism Professor Abraham Van Helsing from Dracula would understand.

"Nothing is too small," he tells Dr John Seward in Bram Stoker's horror classic. "I counsel you, put down in record even your doubts and surmises. Hereafter it may be of interest to you to see how true you guess. We learn from failure, not from success!"

The novels of Charles Dickens have frequently shone a light on the dark underbelly of Victorian industrialists. Long before big business placed corporate social responsibility at the heart of its philosophy, the likes of Oliver Twist and a Christmas Carol potrayed industrialists as cold-hearted, ruthless profiteers.

Or to repurpose the maxim that encapsulated the founding spirit of the farmyard socialist revolution in George Orwell's Animal Farm for capitalist purposes: "Losses bad, profit good."

Other business wisdom from famous novels (courtesy of Shortlist):

"The busiest people I have known in my life always have time enough to do everything. Those who do nothing are always tired and pay no attention to the little amount of work they are required to do. They complain constantly that the day is too short."
The Pilgrimage,  Paulo Coelho

"Happy is the man who can make a living by his hobby!"
Pygmalion, George Bernard Shaw

"You can't stay in your corner of the Forest waiting for others to come to you. You have to go to them sometimes."
Winnie the Pooh, AA Milne

"A person who has not done one half his day's work by ten o'clock, runs a chance of leaving the other half undone."
Wuthering heights, Emily Bronte

"For I consider brains far superior to money in every way. You may have noticed that if one has money without brains, he cannot use it to his advantage; but if one has brains without money, they will enable him to live comfortably to the end of his days."
The Wizard of Oz, L Frank Baum

"Unfortunately most ways of making big money take a long time. By the time one has made the money one is too old to enjoy it."
Goldfinger, Ian Fleming

"It's enough for a man to understand his own business, and not to interfere with other people's. Mine occupies me constantly."
A Christmas Carol, Charles Dickens


"It is everyone's bounden duty to try to get more than they have got already. If you have got two shillin' you try to make it into four shillin' . . . there is no end to it."
Sacred hunger,  Barry Unsworth

"I love deadlines. I love the whooshing noise they make as they go by."
The Salmon of Doubt, Douglas Adams

"Making money isn't hard in itself...what's hard is to earn it doing something worth devoting one's life to."
The Shadow of the Wind,  Carlos Ruiz Zafón

"It is very vulgar to talk about one's business. Only people like stockbrokers do that, and then merely at dinner parties."
The Importance of being Earnest, Oscar Wilde